Designed specifically for fishing the Mackenzie Country Canals, the CD Extrasense nano range is the weapon of choice for many of the most avid canal anglers. Constructed using 44T graphite and nano-resin blanks fitted out with carbon fibre reel seats and Fuji SIC guides, the Extrasense Nano is supremely light and sensitive. With actions tailored specifically to each individual technique, the Extrasense Nano range has been designed by kiwi fishermen from the ground up to be an ultimate canal weapon.

Designed specifically for softbaiting, the Extrasense Nano 7’9 features an extremely fast action ideal for keeping in touch with your lure throughout the water column. This extra-fast action provides unrivalled bite detection and hook-set, and has revolutionised the art of freshwater softbaiting. Long casts with light jigheads are made easy, and even the softest touches are magnified through the high modulus nano-carbon blank. Once hooked up, the rod does most of the work for you, and the amount of power through the lower section is staggering for such a lightweight rod. An ideal choice for softbaiting in fresh water throughout the country.

An excellent all-round choice for the Mackenzie Country canals, whether softbaiting or egg-rolling is your go to method. Softer through the tip for additional bite detection and sensitivity, and a slightly slower action than the 7’9” which is more forgiving when using very small hooks for egg rolling. An outstanding option for avid canal fishermen. A truly outstanding rod built specifically for one of the most unique fisheries in the world.

Designed specifically for rolling egg imitations in the Mackenzie Country hydro canals, the 9’ Extrasense Nano combines lightness, sensitivity and power into one very impressive package. The additional length aids both casting when using light weights and clearance from the bank when walking downstream. The tip section is very soft and sensitive allowing you to pick up every touch, even when fish are very gently “sucking” rather than aggressively feeding, and once hooked up you have a huge amount of power low down to keep big fish under control. A truly outstanding rod built specifically for one of the most unique fisheries in the world. 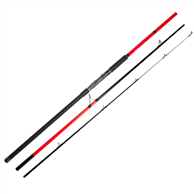